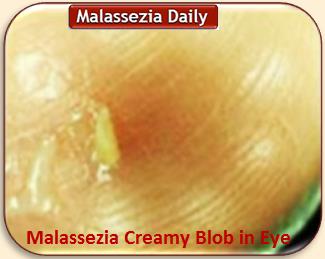 I do Not particularly consider my Condition as Chronic

since i have only had two troublesome Flair-Ups throughout.

One a couple years back, still in the early stages

when i had to resort to wearing Goggles at Bedtimes

to deter Malassezia savaging my eyes.

The Other more recently due to Shampoo experimentations

and underestimating the maintenance frequency necessary

to avoid the eventual build-up.

What i definitely consider  as Chronic

is the Likelihood of Recurrence

and Necessity for Vigilance and Prophylactic Maintenance.

Blepharitis is an Inflammation of the Eyelids, caused by either

and its related condition Seborrhoeic Dermatitis

d) All or Combination of the above

due to resulting Inflammation, Contamination and Infection

Naturally so, since they would all be Present because:

a) Staphyloccal Bacteria are harmless and reside normally

on the skin and mucous membranes (Wikipedia)

b) Malassezia is also harmless part of Normal Body Flora

( This, until… something goes wrong somewhere

* Malassezia is highly attracted to Inflammation

due to the easier availability of blood which seems to need for its cloning.

* Malassezia is attracted to Humidity and Oils

* Blepharitis is considered as Chronic and Persistent

Some Regular Malassezia Characteristic i have observed over time are:

1)  After a Persistent period of practically devastating a particular area,

it abandons it suddenly -for no apparent treason- and moves

to a different one.

I extrapolate this is because the area does not provide enough

of its requirements or perhaps of successful survival of its Clones

thus causing the Blepharitis –and Other Areas– Periodic Recurrences.

3) Relocation -of which i have referred to in Previous Entries-

when Treatments that Do not kill it on Impact are applied

and force it to move to different areas, such as

but in reality there are detrimental effects in the Long Term:

Although Transparent and Invisible the Malassezia Liquid is Thick 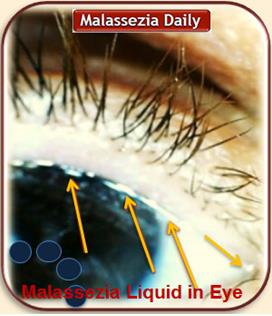 * Covers and Clouds the Eyes

* Deprives the Eyes from Oxygen

to Hydrate and Lubricate the Eyes Causing them to Dry out

* At times as the Clones develop it Feels Gritty and Bothersome

* It is alive and Sucks Blood from the Eye Blood vessels

(My Ophthalmologist had seen Splinter haemorrhages in my Eyes

i usually had them under finger nails –

and although other causes cannot be excluded

i consider Malassezia presence one of them 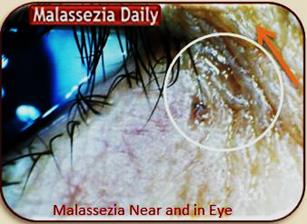 I have experienced a Combination of these Symptoms

in either or Both of the two occasions:

* Eyelids partly glued together in the morning

(*1) The embedded Scales are due to development of Hyphae

digging-in on the skin surface, preparing for cloning

and the more of eventual corrosion of the skin

resulting in bleeding when eventually scraped off

* Red Sore and /or Itchy Inflamed

* Blurred Vision as if through glazed glass

The Combination of Symptoms was different each time

Elements that Contribute to Blepharitis

Flair-ups and /or Start Ups

As a Pathogenic Malassezia Condition

* Trichillomania (Urge to ‘Pull’ the lashes )

1    Antibiotics Cause Some Imbalance that Exacerbate Malassezia Presence

that Upset the natural –Friendly– Flora of the Scalp, causing

some of the opportunistic aggressive ones to Relocate to the Eyes

that would otherwise be unobtrusive

cause -the Trichillomania- urge to Pull and Remove the cause

(Other Psychological conditions may apply in some cases)

Either or All can cause

Deals with history of Treatments

from Beginning to Recent times

* Confirming and/or * Updating past Topics

I am NOT Qualified  To Make a Diagnosis

All References are Based

On my Own Unfolding Personal Experiences 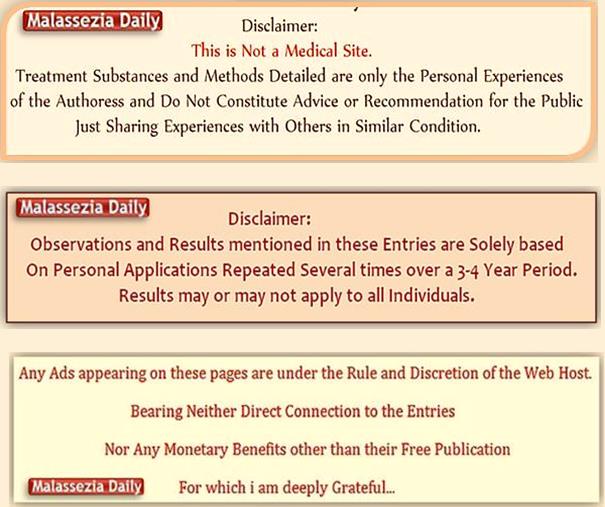 Comments Off on Malassezia~Dealing with Chronic Blepharitis (PT1)